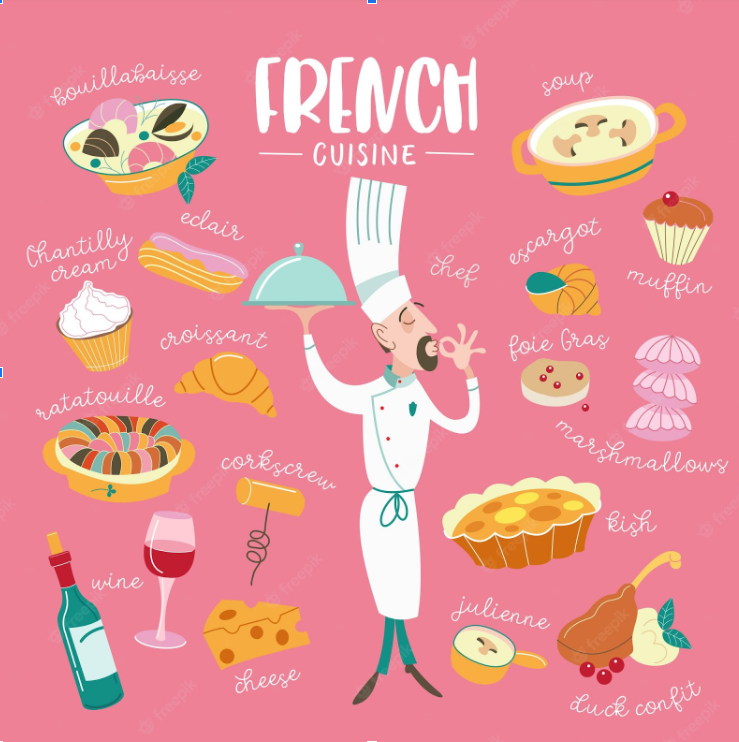 If you’ve traveled to France or been to a French restaurant, you know that the cuisine is more than just baguettes, cheese, and red wine. In fact, traditional French food is so much more than that. From rich onion soup to delicate egg-based sauces and syrupy desserts, there are many things about French food that can seem strange at first. But once you get past the strangeness of these dishes, you’ll find there’s a lot more substance to them than meets the eye. There are some staples of French cuisine that are easy to find almost anywhere these days: baguettes with butter and jam (or Nutella), steak fries, Croque monsieurs, salad vinaigrette, or foie gras. These dishes are all common in France and have become so popular elsewhere because they’re so delicious! There are also some hidden gems of French cuisine which aren’t as commonly known outside of France but certainly deserve a place in your repertoire if you want to try something new.

Escargot is a specialty that many people only associate with France, but it’s actually eaten in many other places, too. It’s actually a very simple dish: lots of snails that have been cleaned out, seasoned with garlic and parsley, and baked in a garlic butter sauce. It’s served with garlic bread for dipping in the sauce. In France, people like to eat it as a starter, or starter appetizer. It’s also common to eat it as a main dish with a side of vegetables. It’s a very rich and buttery dish, so it’s usually not eaten as a daily staple. But what’s the appeal of eating snails? After all, most people aren’t exactly fans of eating bugs. The truth is that in France, snails are very carefully raised so that they are clean and safe to eat. And once you try them baked with garlic and parsley, it’s hard to imagine them any other way. Most people who try them come away very pleasantly surprised that they aren’t actually weird or gross at all.

This is a ham and cheese sandwich with a very special sauce. It’s generally served with a béchamel or cheese sauce on top, and sometimes a slice of ham or bacon. It (or variations of it) can be found all over the world, but it’s especially common in France. It’s a simple, but hearty and delicious meal that is easy to make at home. It’s also very easy to change up by adding a different sauce and different toppings — try some tomato sauce, roasted peppers, and mozzarella for a twist on the classic!

This is a French classic: it’s made with a rich stew of chicken, bacon, mushrooms, and onions. Most recipes call for red wine as a part of the recipe, which gives the stew its name. It’s a fairly hearty dish and is generally served with mashed potatoes or rice. It’s traditionally a very homey French dish that’s good when you want something that’s filling and comforting. Keep in mind that it is a very rich dish, so you’re unlikely to want to eat a giant portion of it. It’s also a very slow-cooked dish, so you’ll want to let all the flavors come together for quite a long time before serving.

This is a very classic French dish that is made by boiling onions in a broth until they’re very soft and almost falling apart, then topping them with croutons and cheese and serving it with a baguette. It’s a very simple, but deeply satisfying dish that’s best eaten when you’ve been out in the cold, or when you’re under the weather and just want something warm and comforting. It’s a very rich dish and often eaten as a starter, or as one or two servings, rather than a whole meal. Again, it’s a very classic dish that you’re likely to find at a French restaurant or French-inspired eatery. But it’s also something that’s easy to make at home, and it’s best eaten when it’s fresh and hot!

Mussels are a popular item in French seaside towns, and a classic way to prepare them is with white wine and herbs. You’ll often see them served on a bed of fries (or sometimes bread) and covered in breadcrumbs or herbs. They’re a great snack that’s cheap, quick, and easy to prepare. You can also transform them into a full meal by pairing them with fries and a salad. Scientifically, mussels are really interesting creatures. They are very high in protein and low in calories and contain iron, magnesium, vitamin B12, and selenium. There are some potential health benefits to eating mussels, including increased good cholesterol and overall weight loss. Be careful not to eat them during the spring and early summer, however, because they are likely to be contaminated with algae toxins that can cause health problems.

Quiche is a baked savory pie with a rich egg and cheese (and occasionally bacon) filling. There are many different types of quiche throughout France and other European countries, but one of the most popular is quiche lorraine, which is made with bacon, eggs, and cheese. It’s a simple dish that you can use to sneak some additional protein, calcium, and vitamins into your diet. While it does have a reputation for being unhealthy, making a quiche with low-fat cheese, low-fat milk or cream, and lean, precooked bacon will keep the calories low and the nutrition high. The quiche was originally thought to be a French invention, but recent evidence points to it being an invention in the German city of Lorraine.

A classic French dessert is the tarte Tatin, which is a caramelized apple and pastry tart. This dish is often served in restaurants as a special treat (and it’s a great way to use up any apples that you have lying around). It’s the kind of dessert that you don’t see often in other countries, which is a shame because it’s absolutely delicious. The tart is best made in a cast-iron skillet and served warm with a dollop of cream or ice cream. Tarte Tatin is often thought to be a truly French dish, but in fact, it was invented in England by one of the first female chefs, Mrs. Tatin. In the 1950s, it was adopted by the French and became a staple in many restaurants and homes.

Ratatouille is a French vegetable stew that’s usually made with eggplant, zucchini, tomatoes, bell peppers, herbs, and garlic. It’s a hearty and healthy dish that you can use to transform a boring vegetable side into something really special. Ratatouille makes a good vegetarian main dish, but it also works well as a side dish or topping for rice or pasta. It’s a very simple dish to prepare, and it can be served warm or cold depending on the weather. Ratatouille has its origins in a dish called olla podrida, which became popular in French kitchens in the 19th century. It is believed that the name was chosen to reflect the fact that the stew was a mishmash of different vegetables.

There are so many different and delicious dishes in French cuisine, and these are just a handful of them. If you’re looking to try something new and are a fan of rich, hearty food, French cuisine is definitely worth exploring. These dishes are all classic French dishes so you can be sure they’re authentic and made with the best ingredients. While they may be a bit different than what you’re used to, they’re well worth trying!